Imagine your ideal job. No, really – give it a shot…

I’ll bet more than a few of the people reading have imagined being a scuba instructor in the caribbean, or just being paid to play Super Smash (which I still can’t believe is now real job – I love the internet!). While it might be an improvement from your current position, I believe the job you imagined wouldn’t keep you happy for long.

After three full-time jobs and five years out of college, I’ve come to (what I believe are) some truths to what makes a job worthwhile. These truths were built up after looking in the mirror in the morning and realizing that what I was doing that day was not what I wanted to be doing if it was the last day of my life. When you find yourself thinking that, the response is not to immediately leave your job, but instead to reflect on why you feel that way. Ultimately, why are you getting out of bed in the morning to go to work?

I present “Schimmy’s Hierarchy of Work Needs”, a guide to answer this question: 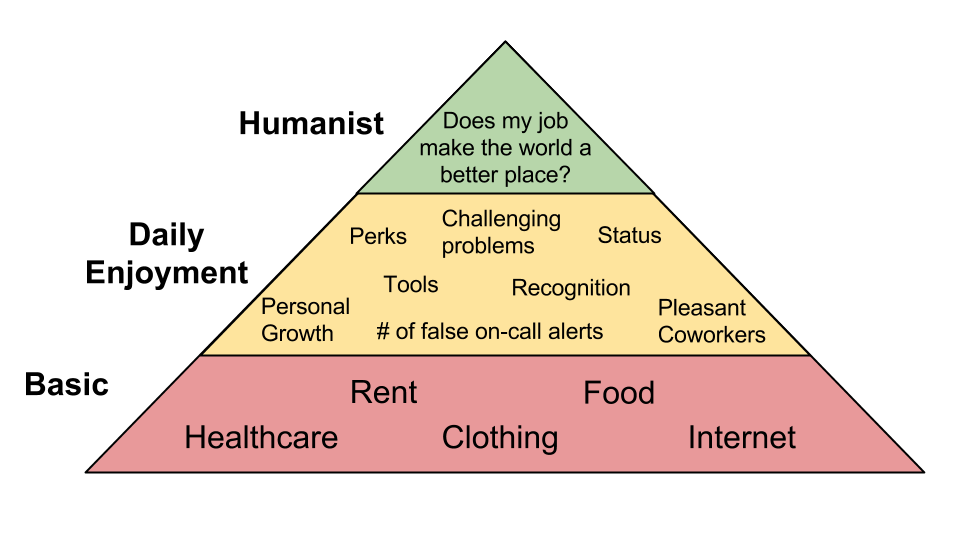 The first reason why you get out of bed is obvious: having a roof over your head and food on your plate is a responsibility you have to your family and to yourself. When sick, you need the money to see a doctor. Also buying clothes is a necessity, at least in other cities where clothing is less optional than in San Francisco. You could categorize all of these needs as ‘Basic’.

That’s fine, but as we can see from the movie Office Space or any number of other sources, that motivation only gets you so far. Given the choice between janitor and video game tester, I think most would choose video game tester even if it paid less – this is a signal that our model is not complete.

The second reason you’ll get out of bed in the morning is because, hopefully, work is enjoyable in some way. Maybe your coworkers are fun to joke around with and you’ll miss the banter (pleasant coworkers), or you really want to learn golang and you enjoy a real problem to learn it with (personal growth), or you love telling your former high school bully that he uses your messaging app (status). You could categorize all of these needs as ‘Daily Enjoyment’

By now, it starts to sound a little like Maslow’s hierarchy of needs, and this connection has been noticed before. There’s been a lot of work in this area, most notably Herzberg’s Two-Factor theory. The theory splits the “Daily Enjoyment” factors into “Hygiene” and “Motivation” – a useful distinction between benefits that keep you from leaving, and benefits that cause intrinsic forward creativity and engagement. You can categorize all of the perks in Silicon Valley into these categories:

However, while Herzberg put overall impact of a person’s work into the “Motivation” category, I think it deserves its own level of the hierarchy.

The third reason to get out of bed in the morning corresponds to the missing top level of the pyramid I would describe as ‘Humanist’. This level concerns the ‘meaning’ that people find in their work, the positive impact that it has on others. This focus on impact might be something which is different in our time, as when Herzberg was developing his theories (the late 1950s and early 1960s) your day job seemingly was less important to self-identity.

At this point I could describe more about what I mean, but I think you’ve already heard the descriptions of what to look for in commencement speeches and sentimental Facebook posts. Instead, I’m going to tell what not to look for.

How can you tell the fakers?

At this point, I imagine many reading this will think to themselves that their job satisfies all levels of the pyramid. After all, their company is changing the world, and making it a better place:

In that clip from the show Silicon Valley, we can see that individuals value humanistic goals in the tech industry, and companies find it important to claim they fulfill these goals. As Mike Judge shows, often the claim is shallow – only put forth to gain status.

To judge the claim for a company suggesting positive social good, there’s an easy test: would the company claim a positive social good if there were no recruiting, PR, or status gains to come of it? If the answer is no, the company is simply behaving as the mimicking actor and the claim should be ignored. A company who truly has that positive social good as a mission will, simply in stating their reason for existence, claim the social good. As examples: OPower, Stellar, Khan Academy, Mosaic, SpaceX, etc. (note that I don’t work for nor own stock in any of these companies)

I do have one final question: does pure scientific discovery belong at the top of this pyramid as well? For instance, pushing boundaries of current engineering (at certain divisions of Tesla, Google, Ripple, etc) seems to also provide that higher meaning.

I hesitate to add this, however, as technology is always a double-edged sword. While you may be advancing humanity’s knowledge, it may be a toss-up whether that knowledge was beneficial. There is the usual example of Oppenheimer discovering knowledge which can be used ambiguously, but also drones, Tor, cryptocurrency and even simple number theory can end up being used in ways unimagined ahead of time.

I’ll argue that, no matter how pleasant being a scuba instructor is, or how amazing it would be to play Super Smash all day, ultimately that dream job is going to lose its shine. While those jobs have satisfied the first two levels of the hierarchy, they miss the crucial tip of the pyramid. They lack the purpose that gives meaning to life, or at the very least gives meaning to the 8+ hours you spend under fluorescent lights every day. Find this last piece for yourself and getting up in the morning will be even easier, I guarantee it.

One thought on “Schimmy’s Hierarchy of Jobs”