Bret Victor just put out a great post about various projects one could work on as a technologist to help with the climate crisis. Many of these are great suggestions for an individual’s ~5 year project, but it might be hard to see how a normal engineer working in the industry could start working on climate change problems.

I’m here to show that you can help fight climate change even if starting a clean tech company or working on a new programming language is out of reach.

The three actions seem small, but given our industry’s future trajectory (up and to the right, of course), these can have a huge compound effect into the future:

We often see climate change as something for other industries to handle – after all, those other industries are moving crops or making steel or feeding cows and we are “just moving bits”. How bad can moving bits be for the environment? Aren’t we already doing well?

It’s true that the tech industry is less carbon-intensive than other industries. However, we are only as “green” as the power our servers draw. While some companies have spent massive efforts on clean energy (kudos, Google!), no one expects or should reasonably expect companies to work outside their core competency.

Luckily for the environment, the more accurately carbon is priced, the better the tech industry does as a whole (see item #2), and so the entire tech industry should be united in working for a solution to climate change.

Again, we don’t need to smelt aluminum, move wheat, or drive a tractor to do our jobs. But if cloud computing were a country, it would rank 6th in the world for energy usage. This gives us an outsized impact on the energy sector, about the same size as Germany! 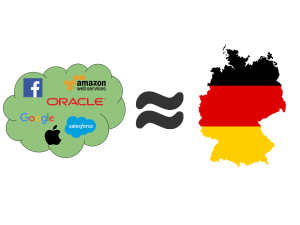 If tech demands clean energy, utilities will have to start providing the clean option, and economies of scale and political barriers start to tip in favor of non-carbon energy sources.

If you’re in one of the green bubbles in the image below, skip to the next section, you’re doing great. However most of us when starting a business just opt for AWS, and while they have some efforts to improve their carbon footprint, there’s little transparency.

If you do use AWS, set your default to us-west-2/Oregon or another carbon-neutral datacenter. At least for the US, us-west-2 has consistently been the cheapest datacenter so this also helps your business. Of course you may need to use some east-coast centers for web latency, but it makes complete sense that data processing should be done with cheap, water-powered, renewable energy.

When you have 100% carbon-neutral servers, your salespeople will happily use this as a selling point, another positive impact to your business. Go ask them how useful that point would be – just send a single email…

Some things you personally can do:

Dirty energy allows the old industries (which we often are pushing to change) a free ride at the expense of our future world. For instance, the negative externality of emissions pollution from a gas-powered delivery truck compared to an electric-powered truck (or drone!) isn’t yet priced into the market.

A quick list of the technologies which face headwinds without a carbon price:

We’ve united to fight for Net Neutrality, but we haven’t lobbied as hard to end carbon-emission corporate welfare. Again, in this case I’m not even talking about the direct ~$10 billion/year subsidies of fossil fuels in the US alone, but just the invisible negative externality that we’ll all have to pay down the road for each gallon of gas burned and each ton of coal sent up a chimney.

One of the issues holding back cleaner power for our datacenters is a lack of renewable energy available where we need to place datacenters. I’m looking at you, mid-atlantic states…

Some tech companies are spending millions building out their own renewable power because local utilities are fighting against even providing clean energy as an option. Only this year, after years of lobbying, has Google succeeded in changing policy in North Carolina. Our industry should have the ability to purchase the cleaner power we want – reactionary politics shouldn’t stop us from paying for something that is actively better for the community.

So how do we change the culture of tech?

For one – fight the idea that companies and employees should stay apolitical on climate change issues. I believe that companies should not try to support democrats over republicans (or vice versa, etc) or even speak out on less economically focused issues such as gun rights. However, that climate change exists and will be damaging is not a scientifically seriously debated phenomenon, and the health of the economy and the climate is important for the well being of all tech companies.

Do you want your company to thrive for decades? A global economy under pressure, spending billions to fix basic infrastructure issues from climate change is not the best environment to grow a business in. Let’s start acting like the future of the economy matters to our industry, simply because it’s the truth.

So if we’re united, what can we actually do to change policy?

You may not believe it, but politicians listen to us. Yes, the big tech companies have lobbyists with cash briefcases on Capitol Hill and that helps, but there are also a lot of small donations which come from the tech industry employees and executives.

Less cynically, politicians also listen to us because they believe we have some sort of innovation “secret sauce” that keeps American competition alive. This might be true, or it might have been something ad-libbed to get funding from DARPA at some point and everyone’s in on the joke. Doesn’t matter: they believe it!

They’ll trust that you can see your way around corners that they can’t, and will start thinking about how they’ll transition their own constituencies to the future that we in the tech industry already take for granted.

If you personally don’t have that kind of access, framing carbon emission pricing as welfare to fossil fuel companies is sure to score a point with your annoyingly-political uncle Joe at the Thanksgiving table. Also, I’m sure you have friends who one day will be a part of the power structure in DC – make sure they understand this idea!

You, personally, have skills which can be literally impossible to purchase. While Bret Victor lays out a number of new projects to tackle, there are also tons of existing organizations out there working on solutions to the crisis. Let’s face it – the job you currently have is unlikely to be your last job. Why not use your skills in the next job to help tackle the climate problem?

Some examples (after 5 minutes of Googling) of places to apply your skills:

You may have to accept a lower paycheck, but I’d argue that the intangible benefits are worth it. You have the means to work on one of the most important projects in human history; consider this an invitation to join the project.

All three points have some common elements:

Of course, there is always donating and side projects / volunteering. Those are great options, but make sure you’re actually being effective when doing so! Otherwise, enjoy the rest of your Thanksgiving, thankful for the opportunities you have to not just make a living, but also to make an impact on a crisis critical to solve for the well-being of centuries of human life.